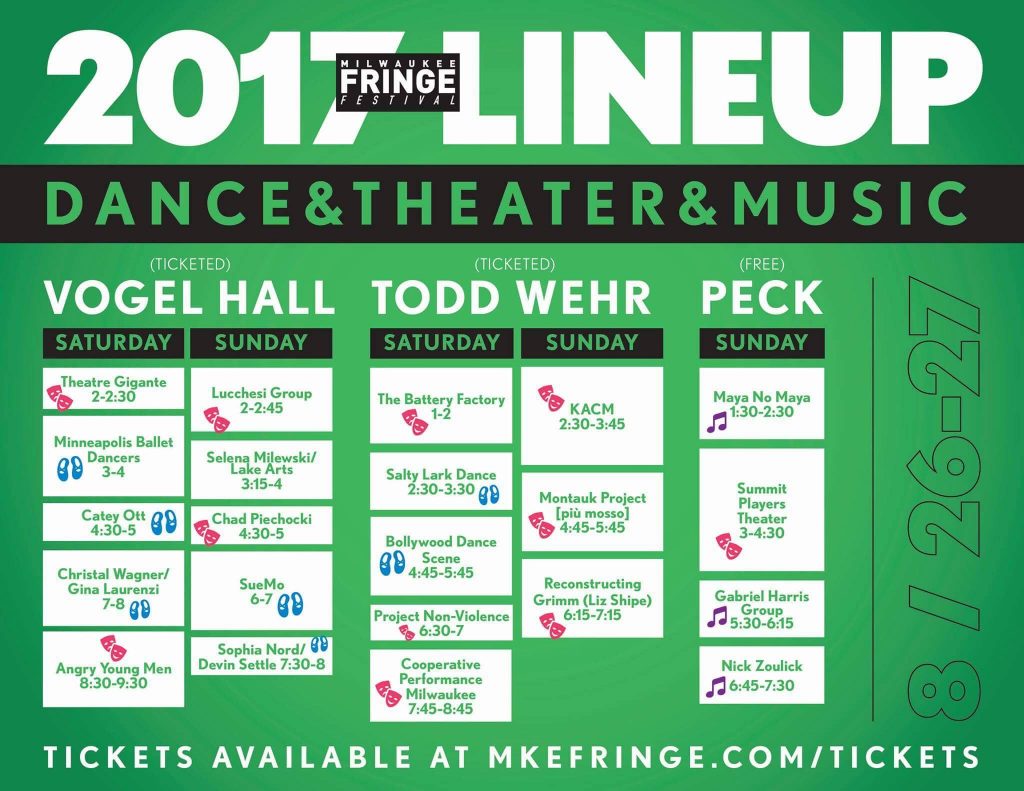 Theatre Gigante performs wonderfully bizarre, poetic one-acts of poet Frank O’Hara, a seminal force in New York’s downtown arts scene in the 1950s and 60s. For one of the works, Lexington Avenue, Gigante commissioned local genius Jason Powell to turn O’Hara’s pastoral, outlandish love duet into a delightful musical romp. It is performed by Powell, Erin Hartman, and a musician/pianist. The show will open with a brief description of Frank O’Hara, and how, as a member of the New York School of Poets, he influenced modern art and poetry. 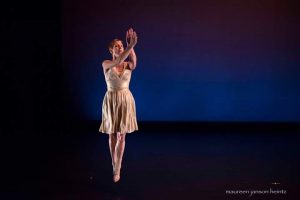 INGENUITY is a 30 minute long concert containing 3 dance works.   The music ranges from modern minimal to contemporary jazz to feature the company’s range from technical prowess to improvisational freedom.  Within in each piece, the dancers all have a unique voice, polished with Catey Ott Thompson’s synergistic flare.

Christal Wagner and Gina Laurenzi explore the relationship between performers onstage and their collaborators’ medium. This nearly hour long performance will be woven together by a series of dance solos and duets that respond to the auditory experience, the visual experience, or simply one another’s movement invention. 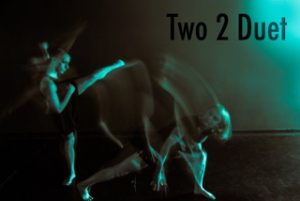 They’re at it again! The fevered brains behind ‘Night of the Living Dead – the Puppet Show’ bring another round of their sketch variety show.Featuring the usual cuddly monsters, homicidal robots,  ubiquitous zombies, and a giant shark! There will be comedy, songs, and graphic violence for the whole family! This year’s special guest is Molly Roberts from local sensations Tigernite!

originally produced at The Village Playhouse

“ a story of Paris and books and soft boiled eggs.”

The Dance of Moons & Buckets is a solo movement piece, assisted by two kokens, exploring a young 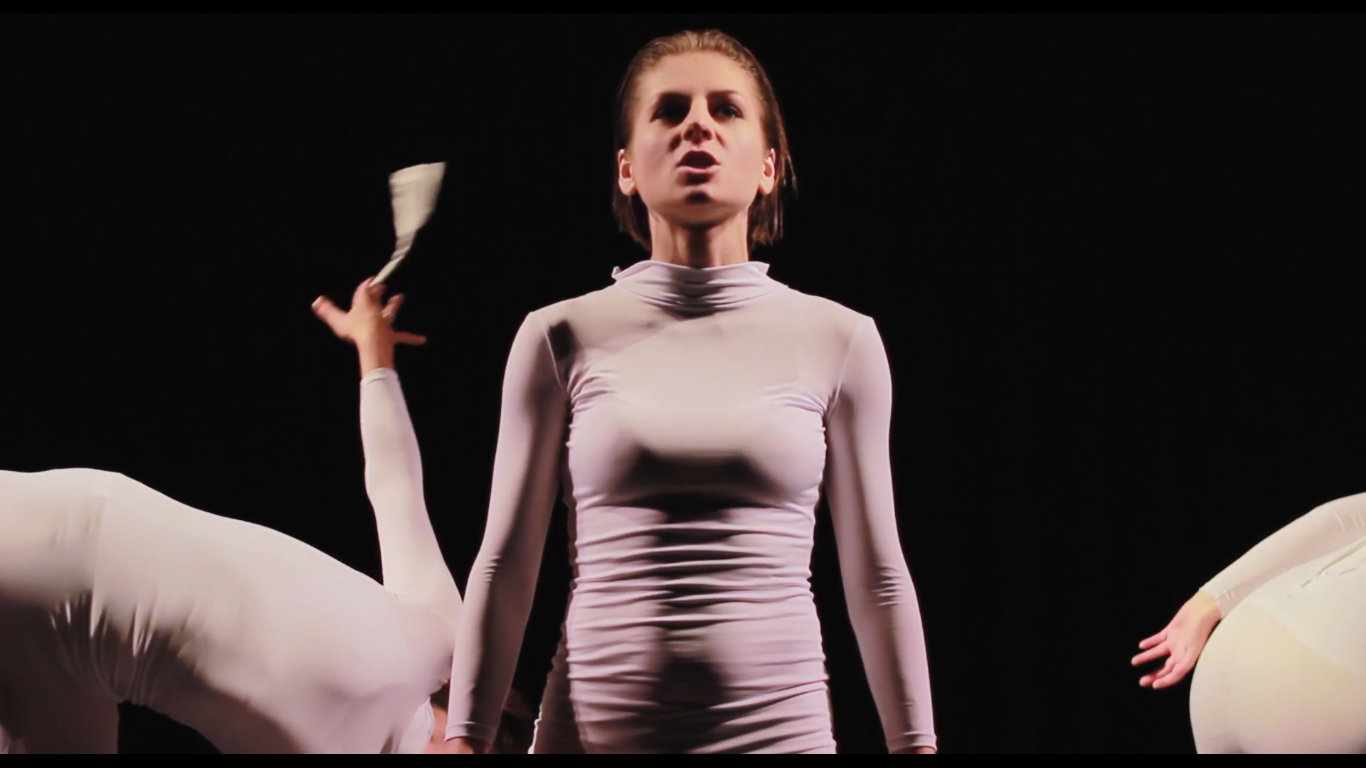 woman’s journey through an abusive relationship. Through the overriding symbols of a moon and a bucket, we explore themes of attraction, repetition and, finally, liberation. While the subject matter is personal, the message of survival and hope is universal. 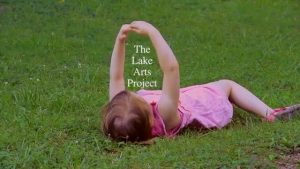 Milwaukee’s Artist of the Year Dasha Kelly-Hamilton and her friends mix poetry and prose about Home. They will also pay respects to the 50th anniversary of Milwaukee’s Open Housing marches that started on August 28, 1967. 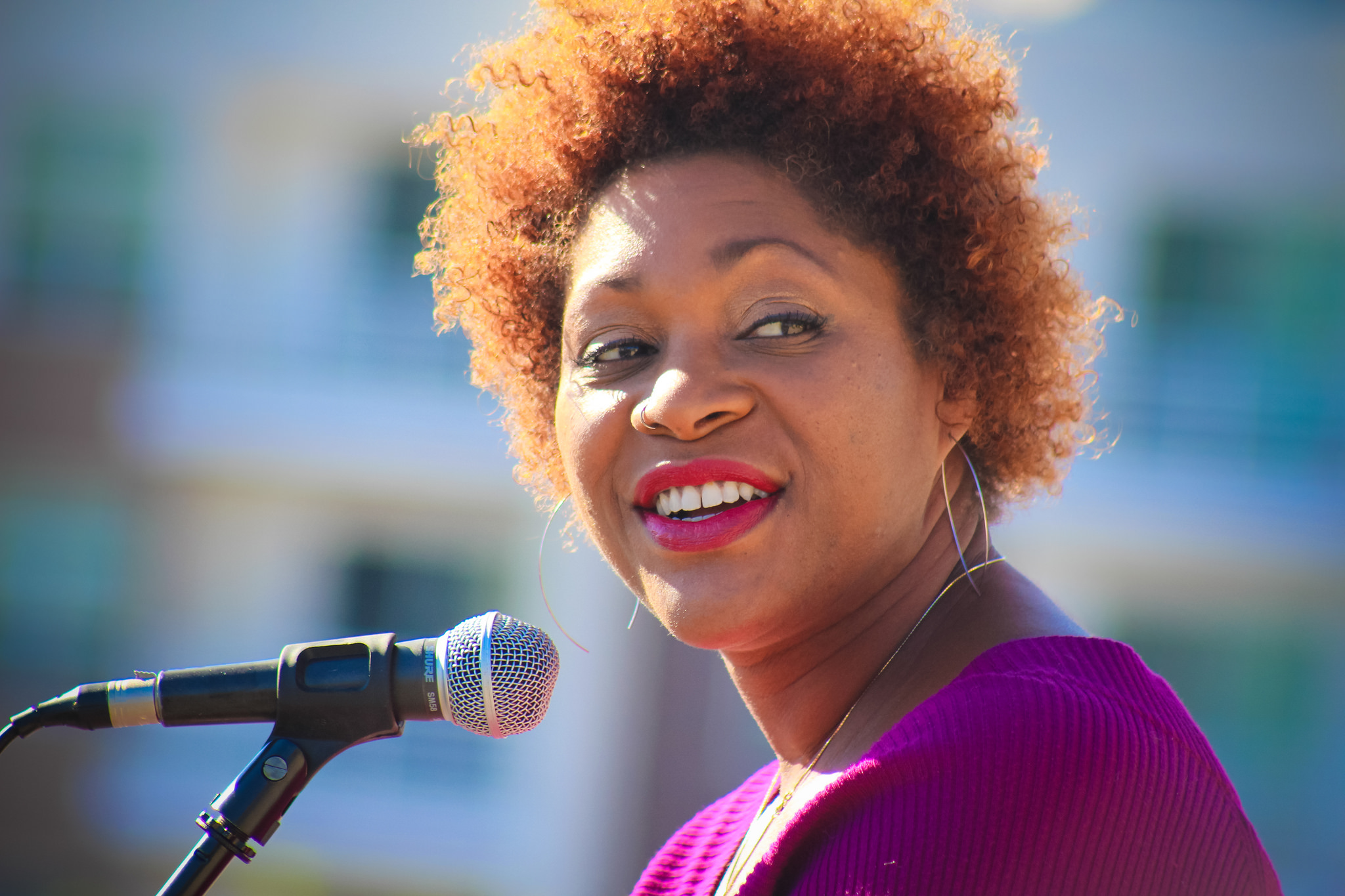 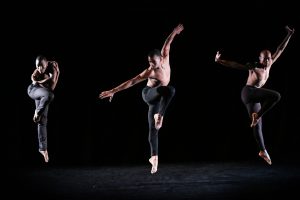 SueMo: A Dance Experience is a newly formed dance company in Milwaukee, WI. Founded by Melissa Sue Anderson and Morgan “Mo” Williams, they strive to bring you a unique performance incorporating concert and commercial dance. SueMo will take the audience on a journey of movement that is edgy, funky, organic, and diverse.

The Company is a fusion of Ballet, Contemporary, Jazz, and Hip-Hop dancer’s with the ultimate goal of versatility in their movement vocabulary. The diversity between directors and dancers provides a thought provoking and lasting experience.  SueMo Dance Company debuted on August 3, 2014 to a sold out show in Milwaukee, WI. 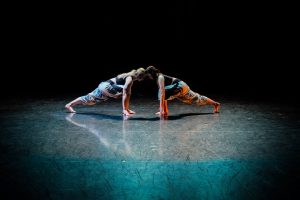 Sixth is a riveting exploration of the Ajna Chakra, Third Eye Chakra, or Sixth Chakra. The dancers movement symbolizes the inner intuition that is opened while meditating on the Sixth Chakra as well as the struggle to find balance between the Nadis (a symbol within the Sixth Chakra represented by two snakes fighting for equanimity). One snake (or in this case dancer) represents the darkness and passive energy while the other represents light and active energy all found within. Through the intense cacophony sound score, there are harmonized voices woven in to produce an audible exploration of the piece, creating homophony between the movement and the sound. The two dancers take the audience on a journey of their inner minds, in hopes that the audience will be able to find a sense of balance themselves.

Cree and Chad want to travel back in time to fix it all – but there’s a glitch in their homemade time machines.  They go a bit too far and get ensnared by two intelligent, hungry dinosaurs.

Music, mayhem and morphing ensue as Cree, Chad, Posy, and Kirk seek to answer the question, “What happens to people who sacrifice others to save themselves?” 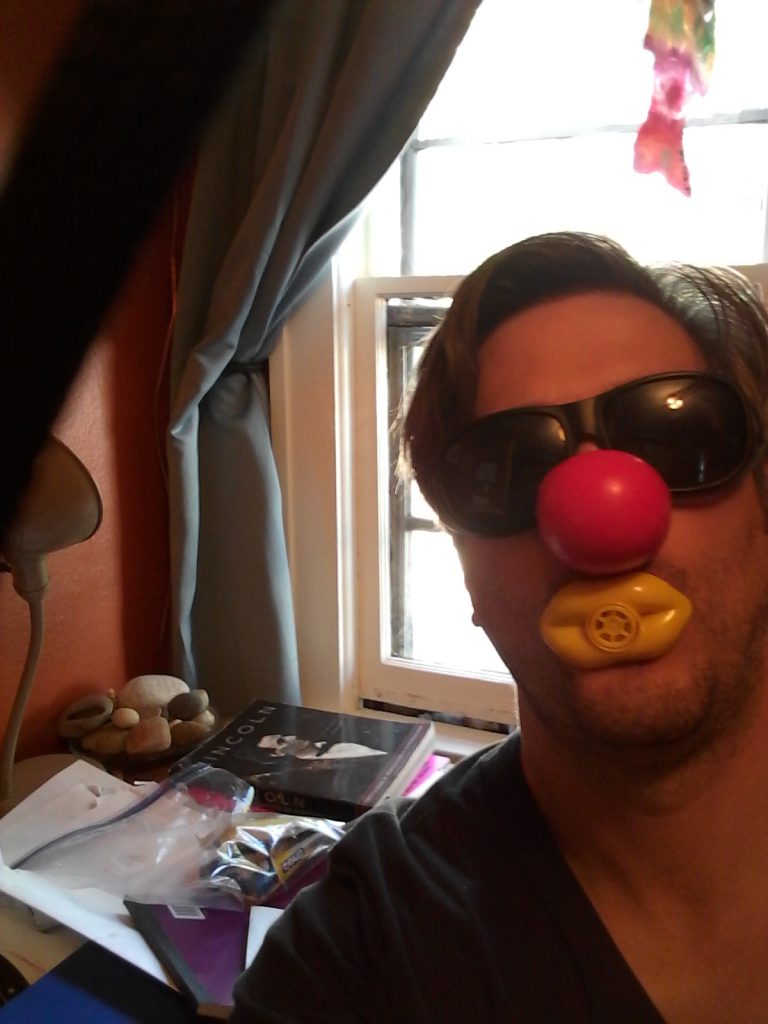 Produced by The Battery Factory and workshopped at The Field Milwaukee.

Conceived in part by Rebecca Rossi-Piechocki with props made by Eli & Asher Piechocki and Ethan Myles.

Chicago’s SALTY LARK DANCE presents Parachutes in Our Pockets, a concert of three modern dance works defined by evocative movement language, skillful partnering, and lush physicality. The production includes the premiere of Artistic Director Madeleine Reber’s Bones and Trains along with Lighthouse and Parachutes in our Pockets.  These dance works allude to voyage and navigation, and contemplate the mechanisms, crafts, and ideas that get us from here to there. Layering intricate gestural composition and poignant imagery, they do not follow linear narratives, but convey a human story. 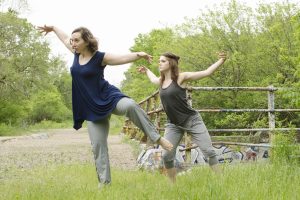 Parachutes in Our Pockets

From the creators of the highest selling show of Minnesota Fringe, three years in a row, Love You Zindagi, is a new production of Bollywood Dance Scene, premiering for the first time in Milwaukee!

A real-life-based performance focusing on the day-to-day issues that teens face in 2017 Milwaukee. In monologues and scenes, Milwaukee teenagers struggle to sort through their problems at a mandatory group therapy session. 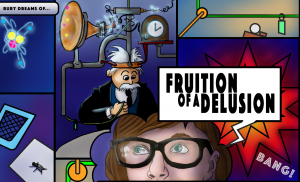 Fruition of a Delusion follows Ruby on her quest to solve the world’s energy crisis with the help of some popular scientists. An original work presented by Cooperative Performance told with text, music, movement and a machine.

2:30pm- KACM (theatre) presents WHO ARE YOU, FRITZ HABER?

English language premiere of award-winning French play. Fritz Haber, a brilliant German chemist, is the man who literally pulled food out of thin air with the revolutionary Haber-Bosch process, saving the world 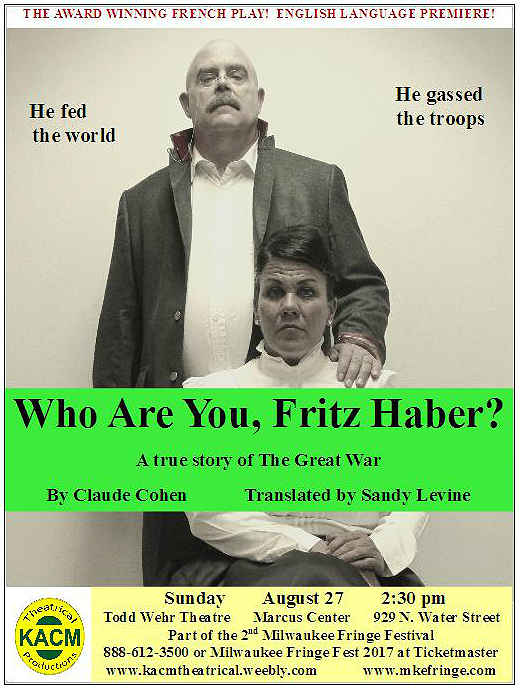 from famine. This will win him the Nobel Prize, but in April of 1915 the world is at war and Fritz has just come home from the front after releasing tons of chlorine gas into the Allied trenches. His wife Clara Immerwahr, the first German woman to become a Doctor of Chemistry is appalled, and the explosive argument that follows has implications for more than just the Haber family, for on his own initiative, Fritz Haber has brought chemical warfare to the Western Front and into the 20th century.

Montauk Project is an improvised percussion/woodwinds duo featuring Milwaukee-based musicians and educators Jake Polancich (drums/percussion/bassoon/guitar) and Ryan Meisel (saxophones, flutes/processors). The project was formed in late 2012 in an effort to explore extreme improvisational opportunities and original music that couldn’t be duplicated in a larger ensemble. Montauk Project continues to serve an artistic longing to react musically to an array of occurrences in our world…good, evil, and everything in between. With this project, the music goes where it needs to. There is an intentional transparency to Montauk Project compositions; allowing the music to breathe, morph, flex, and maneuver. 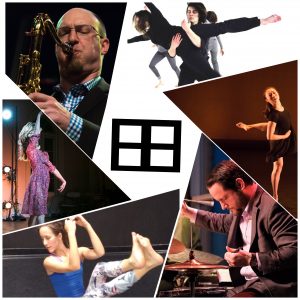 The duo is joined by dancers Elisabeth O’keefe Roskopf, Liz Sexe, Katharina Abderholden, and Liz Lichte as they explore movement through improvisation and sound. “Più mosso” is the Italian musical term that translates to “more motion.”

A new play by Liz Shipe 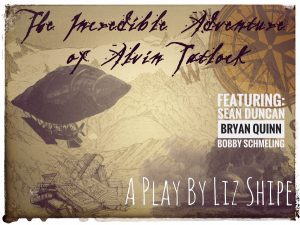 ses a minimal cast to play a myriad of colorful characters and invited the audience to use their imagination. Alivn Tatlock is a man the leads an unremarkable life and only delights in buying used books. One day he discovers a novel that leads him on a madcap journey pulling him out of his beige life. Alvin must explore new horizons both figuratively and literally to discover exactly what he wants from life.

The Summit Players are a traveling, seven-member acting troupe bringing free Shakespeare shows and workshops to the Wisconsin State Parks. They present their 2017 season: a brand-new production of Shakespeare’s The Comedy of Errors. Full of madcap slapstick, mistaken identities and marriage to top it all off, this classic Shakespeare comedy will have you seeing double! When Antipholus and his servant, Dromio, travel from Syracuse to Ephesus, they expect to do some exploring. Little do they know, each of them has a twin brother living in the city. Soon enough, people are giving them gold in the street, men are bowing to them, and they both have wives! Between a run-in with royalty and a demented doctor, it seems like they might never untangle this twisted web of errors!

“…Nick Zoulek’s performance, on saxophones of every range, is stunningly virtuosic, whatever the genre.”-The Wall Street Journal.

In Rushing Past Willow, saxophonist and composer Nick Zoulek pushes past the boundaries of saxophone sound. What begins as a recognizable line circles back on itself, erasing ideas of beginnings and endings. Comprising Zoulek’s solo works for alto, tenor and bass saxophones, the pieces coalesce into a raw, emotionally-driven narrative of compassion, connection, chaos, and time.

Step 1 (AKA chips and salsa): harvest tomatoes from your garden or nearest farmers market to make a delicious homemade salsa. Try the variety of homemade salsas and vote for your favorite!

Step 2 (AKA bailemos salsa): Enjoy some salsa music and take a salsa dance class. Beginner’s welcome! We will also be hosting a salsa dance contest if you care to try or just watch. The evening will conclude with a social dance for all levels first time beginners or experienced dancers. Everyone is welcome and sure to have a great time!

Local improv poet, Anja Notanja Sieger will set up with her typewriter offering to describe your essence instantly, on-the-spot through words and a drawn picture.

As seen on TMJ4 and Fox 6, Alice is Milwaukee’s premiere resident living or human statue performer. She 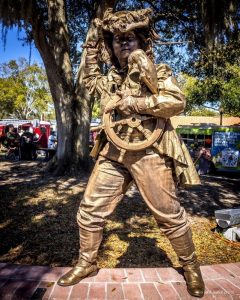 travels the country creating delightful photo opportunities for children of all ages! Unlike many performers of this type who typically offer 1 or 2 characters Alice offers nearly 15 and that list is ever growing! Some of her most popular you may have seen at Summerfest and other festivals are her patina pirate, cowgirl, mermaid and Rosie the Riveter. You may have caught her last month at Bastille Days as Benjamin Franklin! As a matter of fact, she has become in such demand that she now has an intern and you may have seen her at Summerfest as Amelia Earhart! 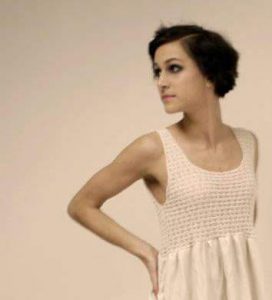 Exploring the limits we set for ourselves, and the subconscious thoughts and actions that sculpt one’s existence.